Most years I’ve posted the wordcount for writing in the previous year right after the writing year ends. Which is November. October 31st is my last writing day of the year, typically. November got complicated and December was worse. January has been chaotic, but at least it’s a little less emotionally fraught. Work is demanding in a new and stressful way, which takes some of the energy that normally would go do daily writing or being creative or just…anything besides sitting on the couch under a blanket and watching reruns of Murder, She Wrote.

But I’m here. And I am trying to make good choices when I can. I’m exercising most days at least for a while. I’m drinking water when I remember. I choose to watch things with Sarah (when she’s up to it) that make me feel good. I read stories before bed that lift me up instead of feeding my insecurities. I’m looking ahead at the next job I want inside my company and working on how to get there. I’m not hating on myself when I fall down.

And that’s…about as much as I can really ask of myself right now.

Here is the writing summary for 2021. I did only write really 3 works if you count part 4 of the TMOI series as a single novel. It can also be read as 12 oneshots for 14 total works. Either way, I don’t think it matters. I managed 300k words in the second year of the world coming to an end, and that is worth celebrating. 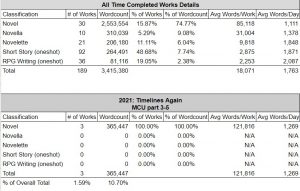 I’ve been working on an MCU fairy tale, but then after that I want to go write another original novel. I have…40% of it figured out. Which is to say, I have my main characters, my world, and my narrative style. I’m just…lacking in plot. I’m working on it. I decided I didn’t want to go back to the urban fantasy I started previously because I just can’t get my head around parts of it. So I’m starting over.

It’s a tough time to be stretching for creativity, but I need that stretch, I think.

The one good thing I can say about *waves at everything* is that…I’m not any more scared of most things than I was before. I’m better than ever at getting shots and having blood drawn without passing out, though that may just be repetition with all the damn tests I have to get on a frequent basis for my illness. I don’t know that I have much improved my self esteem when it comes to my writing or even singing, but I don’t think it’s much worse, either. Events that rocked me to my core didn’t tip me over. I’ve questioned if I can keep on doing all the things I do, but less so whether or not I’m worthy to do them.

In a world where so many people, lives, hearts, minds, spirits are broken, where so much tragedy and fear has overwhelmed every day of the last nearly two years, I didn’t lose those things. I lost other things, lots of them. But I didn’t lose myself.

I’m having trouble getting the MCU fairy tale out of my brain, but I think that’s partially because of aforementioned exhaustion (especially the work-related stuff), and partially because I’m not sure what I need from it. Usually my writing is about saying something I believe and simultaneously feeling something I feel as deep as I can. And with this one, I don’t think I’ve figured out how to really do either.

Which, maybe I should just pause and write the original thing and feel my stuff, and then see how the MCU fits upon return. It wouldn’t be the first time that happened, even if it’s annoying. I like being able to start and end a project all at once!

Don’t mind me. I’m just fussy about myself. I hold to standards I would never so much as suggest to anyone else because I always want to push myself. I can do better. I can be better. I can work harder. I can be smarter. And if I can be, then I want to be. Even when I might be better served taking a break.

There’s a balance in here somewhere. I have no idea what it should be. I’ll keep working on it.

There’s a universe inside me. A million stars around which orbit a billion stories. And I’m going to tell them all for as long as there is breath in me.

If we’re all only as much as what we create to leave behind, then I’m going to leave a library.

I know nobody reads this thing except maybe…3 or 4 of you? So I’m ending here to see if I can churn out a few more words tonight. But I leave you with this song. I’ve spent the last several years building up playlists of music for writing, but the vast, vast majority of it has been vocal. Somehow, now I’ve turned around and I really want non-vocal music for writing. I have a playlist of 122 songs, some brand new to me, some I’ve loved for literal decades.

But one of my oldest is this. It’s the 2nd track on the first piano CD I ever owned, bought in middle school. The first track is one intimately tied to spiritual practice. But this one has always just helped me quiet down and think.

So if you need a moment of peace, here’s “Nightfall.”