I am intentionally backdating this entry because it really belongs in 2019 and not 2020.

Sorry for disappearing like that. I really did intend to put up a few more blog posts in December. And then things went really sideways and I needed to prioritize.

Trigger warning for the end days of a beloved cat.

Sarah and I adopted Maia in June 2005. She was 1.5 years old then, born January 2004, and had been in a shelter with her kittens who had all found new homes. We brought home another cat with her, Thunder, who was about 5 at the time and had already been through one family. Maia was a tiny thing, a tortoiseshell cat mostly black and gold with a habit of interrupting any time anyone was petting Thunder, because she just wanted ALL THE PETS. She was friendly to the point of silliness, even getting stepped on regularly in her haste to greet people as they walked in the door. She also became Sarah’s couch companion, wanting to be on Sarah’s lap, on the pillow behind her, or otherwise nearby as often as possible — and when Sarah was asleep most mornings, Maia would climb onto the bed and sleep on her chest and sneeze into her face. Maia seemed to enjoy the game of getting her whole head as close to Sarah’s face as possible, including sleeping on her neck and jamming whiskers up her nose.

Maia and Thunder had a rough start, but once they sorted out their kitty hierarchy, they became good friends. They would tussle and Maia would ATTEMPT to prove her dominance, but Thunder outweighed her two to one, and would just put his heavy paw on her head and that would be that. The rest of the time, they would groom and cuddle and generally enjoy each other’s company. Thunder was more tolerant than appreciative, I think, but Maia was happy with having a kitty friend who was warm and purred at her.

In the beginning of 2015, we lost Thunder unexpectedly. He had a seizure late one night and we rushed him to a 24-hour vet clinic. By the time they assessed him, he was seizing again. By the time they were giving him the injection to put him down, he was gone.

I’ve had cats my whole life, but no loss is easy. This was the first one that hit another cat as hard as it hit me, however. Maia responded to Thunder’s death by falling into feline depression, not eating, not wanting pets, hiding in unfamiliar spots. That kind of behavior in cats can be dangerous, as stress and not eating can kill them relatively quickly.

And, the truth is that I’ve always found I move on better from the death of one pet with the introduction of another. There is no replacing the one who was lost, no filling that specific void, but a new cat changes the shape of the hole in my heart, and that makes it easier to go forward and remember them with fondness (and exasperation) rather than grief.

So, within a few weeks of losing Thunder, we brought home Kiba.

Kiba was a very different cat from Thunder. Both were big males, and Thunder had always been a little timid, but Kiba is a downright coward. Even after we finally got him to come out from under the bed, he maintained the habit of running under there any time he was startled. Or the doorbell rang. Or someone came in. Or it was a day ending in Y.

Anyway. Kiba has become our big buddy, and he’s cuddly and lovey and vocal and always wants to be where his people are. But he and Maia did not forge any kind of useful relationship. Maia, ever the submissive cat, finally was the old lady who ruled the house, and Kiba was the interloper. Their fights were legendarily noisy, though no harm ever came to either participant — they fought more for show than to cause pain. Maia would shove Kiba away if he was sitting somewhere and getting pets, and he let her, because she was the old cat with the established territory and he knew that. They got to the point that they could sit within inches of one another, but that was it. No grooming, no cuddling, and no touching except as precursor to combat.

Still, Maia’s depression was gone — apparently having a kitty companion works even when they don’t get along. And she spent the time getting even more pets, sleeping on Sarah, sneezing on phone screens, chasing Kiba, and generally enjoying her kitty life.

In the fall of 2018, Maia was diagnosed with the early stages of kidney disease. Not at all uncommon in a cat her age, in fact, and she was still active and healthy, so that mostly meant a change to a prescription food and watching her for more changes. Kiba was already on a separate prescription food, so we took to separating them overnight so they could free-feed, and so there were no loud battles while we were asleep, and everybody was fine with this arrangement.

In November, we took both cats for their annual visit, and Maia had her blood drawn to check her levels because we were starting to notice a few little changes. Not much, but we thought her thyroid might be acting up. She was starting to lose weight, and her appetite was down. We had noticed a few odd spots on the floor, but Maia already had a history of a little bit of throwing up from time to time, as cats do, and sometimes it was little more than water, so we didn’t think anything of it. Her test results were actually really normal, so we assumed all was well.

A week from that vet visit, we noticed Maia urinating on the floor. We called the vet, but they warned that incontinence was not unexpected in a cat with kidney disease, even controlled, and at her age. We started putting towels on the couch so she had something to catch the urine if she didn’t make it to the box, and set up a stool to make it easier for her to get up and down. Soon, though, she was regularly not making it at all. She also slowed down how much she was eating.

We called the vet to ask for advice, but they said that the stress of bringing her back in might do more harm than good. We were tasked with getting her to eat as much as possible to see if that might help her regain energy and thus control. In the meantime, we started her wearing kitty diapers. First cut from cloth, then newborn disposable diapers, we changed them regularly and kept her clean — and learned that it would probably have been easier to bathe and diaper a running chainsaw than Maia, who was deeply displeased by this whole process.

The diapers worked at controlling the mess, and a whole lot of laundry later our place was kitty-pee-smell-free. But it showed us a new problem — Maia wasn’t having bowel movements. We let that go a little while to make sure she was eating enough, then added Miralax to her water to try to loosen things up. She would regularly strain, but to no avail. Until SUDDENLY THERE WAS AVAIL.

Poor kitty suffered a whoooole lot of loose stool for days. No blood, which the vet said was good, and if we could get her eating now that her system was running again, we would have a chance.

But, really, Maia was done — only none of us knew it.

On Thursday the 19th, when lots of other people were out seeing Star Wars, Sarah and I stayed in with Maia mainly getting pets on my chest. She wasn’t purring, we realized, for the first time in her life. She still came to get cuddles, but she was still in a way that was eerie on her. And she was starting to stumble a bit as she went to get water or back to her place on the heating pad. Sarah and I went to sleep with the proverbial bad feeling.

In the morning, we knew. Maia barely moved, and when she did, she walked like she was dizzy or disoriented. We called the vet and made an appointment and held her and cried for the hours in between. In the car on the way, she kept wanting to see us both, turning her head and meowing at Sarah until she could position her correctly. We told her what a good and brave girl she was and how much we loved her. By the time we laid her down on the table at the vet, she didn’t even have the strength left to lift herself up.

We let Maia go on Friday, Dec 20th, less than a month shy of her 16th birthday.

(She was obstinate to the end. It took more meds than vets give a 30 pound dog to stop her heart. Neither Sarah nor I were surprised.) 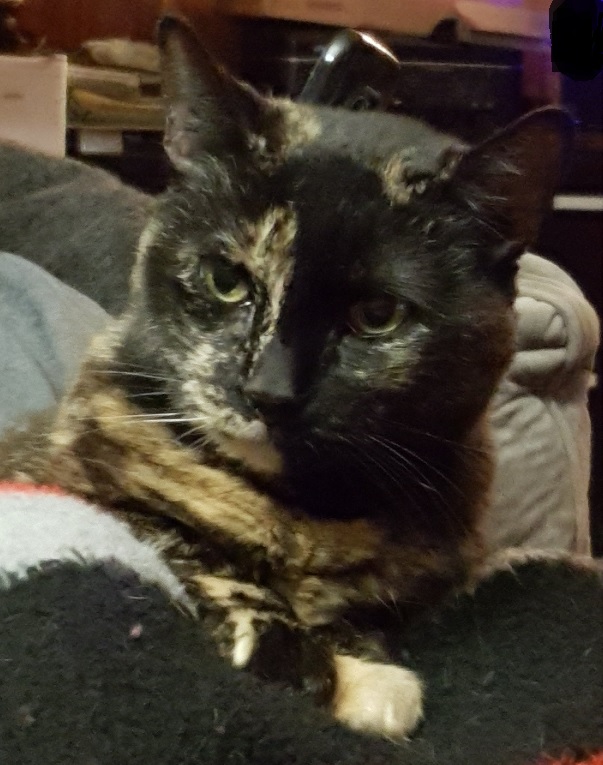 So that’s where I went in December before Christmas.

There’s more to talk about — the things that ended in 2019 and the things that began or will begin in 2020, but that is for next week, I think. Today I just wanted to tell the story of Maia that came to its conclusion.

But don’t worry. Yes, it’s sad, and yes, I still cry sometimes. But the wheel turns, the light gets stronger, and life cycles begin anew.

And we have a new kitten, too.