So, I think I’ve written previously about my total and complete lack of art skill. It’s not just that I can’t draw, or paint, or otherwise produce visual art. I’m also not great at envisioning it. I can imagine a scenario in a story, or characters, or abstract symbols. But creating something visually interesting and artistically coherent is just not my strength. At all.

But I love art. I love to have color around me, and images of things that make me feel. I have collected figures and pieces from every place I’ve ever traveled or lived, and I love being able to look at them or pick them up and remember what the air tasted like, or how the birds sounded, or what I learned while there. And I love art that is unconventional, art that means something to me but others would find stupid. It’s like an in-joke with myself.

The house used to be filled with art, a picture or a hanging or a carved statue every 3 feet. We kept all of it, because it all had meaning, but moving to a smaller place meant rethinking how we deal with it. Also, while you absolutely can just line the wall with paintings, it’s much more effective visually when you cluster them together in a collection.

So, on Saturday, after 6ish hours of meetings for CONvergence, a couple of friends came over to help us do just that.

Here is the result: 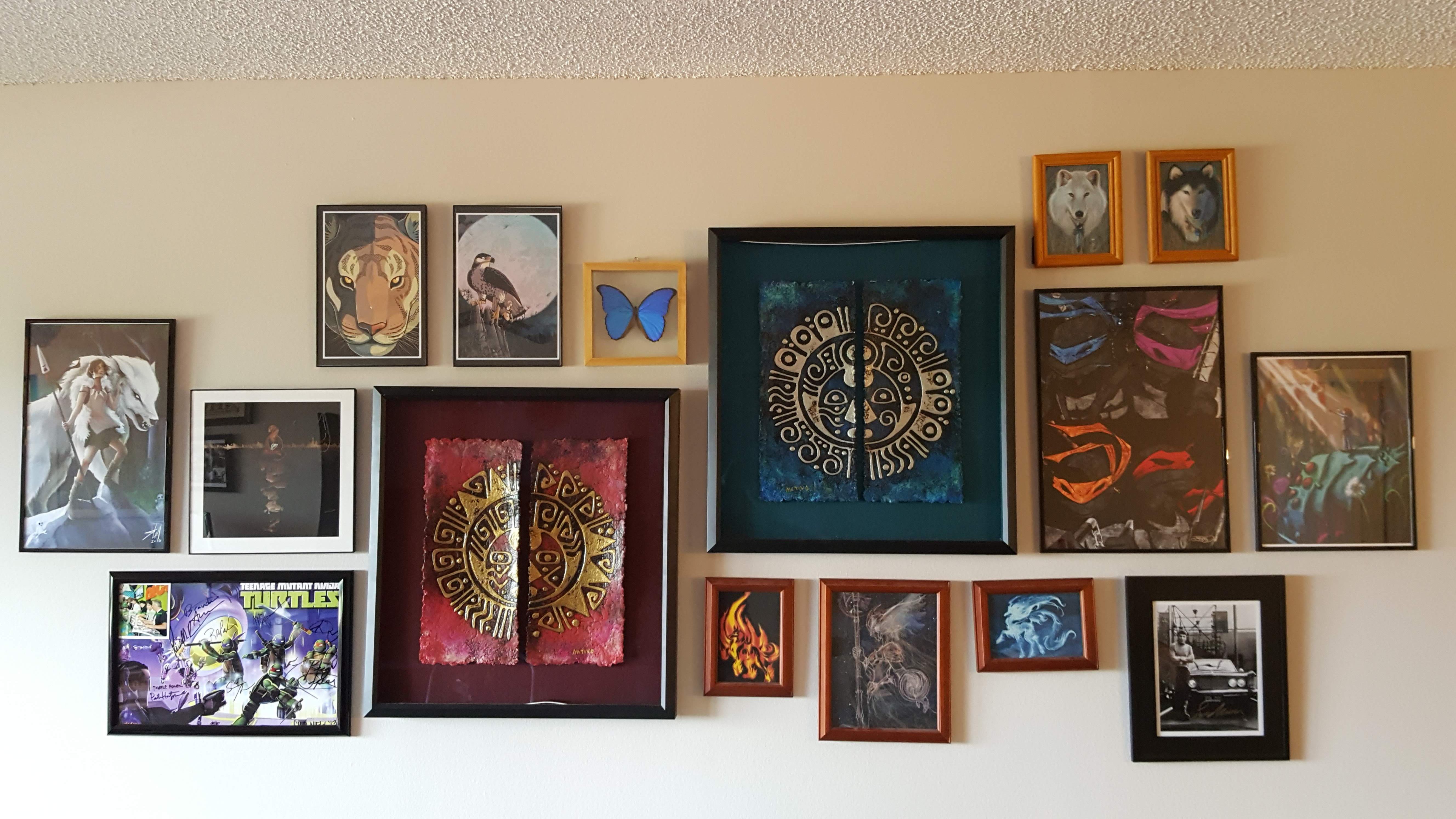 Can I just say? MY FRIENDS ARE AMAZING. For so many reasons. But in this case…I mean, just look at it! It’s beautiful!

I keep walking into the room and just STARING.

I love everything about it. I love the shape, I love the balance, the colors, the way not all the frames have to be black to look like they belong. I love having all the disparate pieces that add up to who I am (and who Sarah is — it’s hers too!) put together like this. And this is just one collage of the three we did!

Moving left to right, we start off with a picture of Princess Mononoke. Beautiful art we bought at CONvergence two years ago from the artist, along with the picture of Nausicaa at the other end. Next in is the newly framed picture of our art print from Beth Kinderman’s album, which arrived just in time to take its rightful place amidst the beauty. Below that is my signed picture (that I bought, did not get in person, SIGH) by the voice cast from the 2012 TMNT. I like everybody, but, let’s be honest, IT IS ALL ABOUT ROB PAULSEN VOICING DONATELLO.

Starting above Beth’s art are a matched pair bought at the same 2017 CONvergence from a different artist; they happen to be characters in a series she puts out, but they also pretty much stand in for Sarah and I (I’m the tiger and she is the hawk). Next to them is the framed Morpho butterfly which was a gift from a friend after I saw them in person when we were in Ecuador in 2009 and proceeded to have a series of life-changing realizations about myself.

Then we have the two big ones, the centerpiece of everything. These we also bought in Ecuador from the artist. They represent the sun god and the moon goddess and they are. Just. Perfect.

(Even if the matting in the frames is giving way — we intend to get that fixed eventually.)

Those two used to hang over our fireplace in the house, so I’ve pretty much been staring at them nonstop for a decade, and I have yet to get tired of them, of the colors, of the symbols. They’re made with banana leaves and recycled paper, if I remember correctly, and the texture is really neat up close, too. Even after all this time, they still speak to me.

Below the moon goddess is a set of three which goes back to 2008 in one of the apartments. All three were found online somewhere (probably a long-dead Deviantart site) and meant to represent the three of us then living together — Sarah, me, and another friend. It was our promise that we would be a home and a refuge for one another, no matter what life threw our way. The friend lived with us for a long time, even in the house for a while, and now lives just across the river from our condo. But for 11 years, we have still be home base for him and for others.

The condo really couldn’t be home if it wasn’t home for more than just Sarah and I.

Left of those is my signed picture of Leonard Nimoy as Spock. It was in one of the last batches he ever signed before he passed away, and I was lucky enough to buy it from his website just in time. That was when he was also offering to be a surrogate father or grandfather for people as well, and I got in on that, too. He also sent a free gift when he sent the picture, which I have perma-loaned to my biggest Trekkie friend so she has something of him in her house as well. I miss him in the world and his wisdom and wonderful humor, but I’m so glad to have this piece of a person who helped define me as a nerd when I was sneakily watching TV long after my parents had gone to bed.

Above is my big TMNT print, also bought at CONvergence in 2017 but not by me. That was a gift from a friend who saw it and thought I would love it. I pretty much broke down and cried when he gave it to me. I didn’t even SEE IT when I was looking for art, and it just…I…IT TURTLES OKAY!!!

Above the turtles are a pair of wolves Sarah bought for herself, also from the artist at CONvergence, but back in 2013. She says they don’t have specific meaning to her other than the fact that she also strongly identifies with wolves, but I look at them and I see her reflected too.

(Which is not to say that the rest of the art is “mine.” It’s VERY MUCH MUTUALLY SHARED. But some things, like the butterfly or Leonard Nimoy, speak more to me. These wolves speak more to her. Mostly, though, it’s both of us.)

And lastly is Nausicaa, so we have Miyazaki on either side.

It makes me SO HAPPY to have this. To see these things brought together intentionally and beautifully, a space made for all of it. And doubly, triply so because I could never have fashioned this layout on my own. I needed my friends for that.

But I never could have fashioned myself alone, either, so it all works out.

There’s more art to hang, but this will be the centerpiece of it all, and very rightly so. After all, this is who lives here, feelings and experience and knowledge of self all wrapped in one.

And also nerdity and fandom.

Because, well. What else would you expect, really?