These lyrics are by my dear friend and acquired sister Beth. They come from the first track of her newest album, The Hero’s Journey.

And now I’m going to tell you why this album is FUCKING EPIC and you need it in your life.

The concept of the hero’s journey as written by Joseph Campbell was the original inspiration when Beth began on this journey of her own more than a decade ago. It’s a structure more than a trope, a monomyth that underpins so many, many,many stories in our culture. You can tell the story of Jesus, Ahab, Jane Eyre, Frodo, the last unicorn, Spock, Wonder Woman, Harry Potter, and a gazillion others under this model. Roughly, it’s been illustrated this way (thanks Wikipedia): 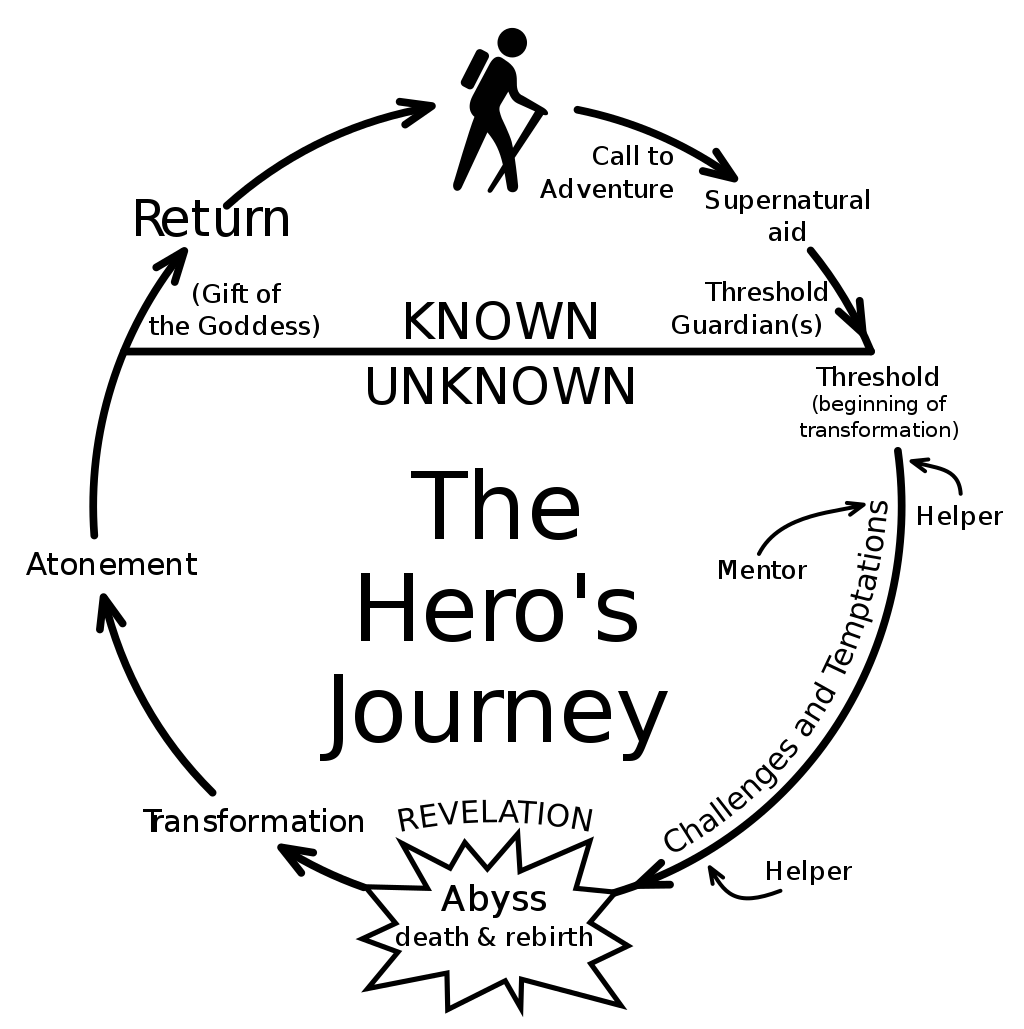 It’s a natural subject for an album, especially for someone so deeply embedded in music and filk culture as my friend Beth. But Beth’s perspective is always unique and I find it no less so this time than I have on any other song project.

(Look here for Beth’s rewrite of Cohen’s “Hallelujah.” No, seriously. And look at the lyrics. When you finish laughing your ass off, you’ll thank me.)

I’ve known Beth for more than a decade as well. We started as friends of friends — I was pulled into her group by a then-roommate who was regularly at her place for roleplaying on Sundays. Before long, I became a fixture at their table, and those Sundays were my escape from everything. Then I became a player in Beth’s game, and there was pretty much no going back from there. The people at Beth’s table became my friends, and ultimately many of them became family.

Sarah and I had tried doing music in the cities a tiny bit before we met Beth, including one hilariously disastrous Christian music competition (spoiler alert: being married kinda played against us). But we really didn’t know anybody, didn’t know where to perform, didn’t have any contacts or anything. One night, though, Sarah came up with me and we jammed with our guitars with Beth for a while, and she thought we might have something worth sharing. Not long after, we played our first gig at a bar.

(The only people who showed up were our friends and Beth’s band. But that was our biggest audience outside of a dorm room so we were more than pleased.)

For a few years, Sarah and I did some light gigging around the Twin Cities. We didn’t really seek it out for ourselves — but if Beth was performing with her band somewhere, a lot of times we could sign up to open for them. It was fun. Her bandmates are fantastic, and as often as not, they’d end up on stage with us jumping in to back us up.

Then, in 2010, Beth was performing at CONvergence but her usual backup singer couldn’t be there and she asked me to step in. Singing with the full band was amazing, but I got a lot more that night than a neat experience rocking out with Beth and the Player Characters. That was the night I spent at my first CONvergence, and when I crawled home at 3am, I woke Sarah up to tell her that I had just discovered our community and we needed to go to it the following year.

So, really, everything that’s come since then for me and CONvergence can be traced back to Beth.

In 2012, Beth and Dave (her producer, engineer, and originator of all the weird guitar noises) helped Sarah and I put together a 4-track album of our own. We only ever sold about 5 copies, but the experience was great for us regardless. And it meant we were a lot more prepared when we started performing at CONvergence ourselves.

But all the while, as Sarah and I figured out our style, and what sort of performance schedule worked for us, and what songs we could share versus which ones we kept for ourselves, Beth was working her way through this album.

Beth’s songs always seem to speak to a part of myself that I don’t always remember to listen for. She does things with music that would never occur to me. (Dave calls it the “key of Beth” and Sarah and I have to agree. It’s that thing where a level of mastery means you can break all the rules; Beth just does it naturally. It’s amazing.) She can hear combinations, melody lines, arrangements that my brain just can’t grasp. But she also writes lyrics that are so strong, so beautifully crafted. What she does putting language together to create meaning always leaves me in awe.

Like the hero in her album, Beth’s made her choice to walk this journey, but she does not come to it empty-handed. She’s not the plucky hero who has nothing going for her but a quip and dumb luck. She embarked on this journey well-supplied with talent and experience and allies and clarity in her eyes.

Not without help — the Player Characters really outdid themselves on this album. I will never get tired of listening to what they can create when they unleash their massive talents.

I’ll admit it. I am more often than I am happy with thoroughly intimidated by Beth and what she can do as a musician. Her style, her skill, her raw talent, her lyrics, her drive — there’s really no part of me that feels I could ever do what she does even remotely as well. But then Beth invites me to sing on her album, and all my feelings go WOOOOOOSH.

Sarah and I both sang on this one. We’ve sung on others, too, but this one was so much more. It was a project that was close to Beth’s heart and soul, and it was a project we watched eagerly when Dave gave us access to the files, because we could feel what it was becoming. The chance to be a part of this journey, well. There was no way we wouldn’t happily sign on to be a couple of side characters for a few steps of the quest.

You’ll hear us singing backup in a few places, but the ones that had the greatest impact are the Crossing the First / Crossing the Return Threshold songs. They’re some of the finest and most well-crafted pagan invocations of the elements and directions I’ve heard put down, and we got to be part of them. Sarah sings for Fire, and I sing for Earth. And when I think about standing in the studio next to Sarah and Beth, putting these verses together, I am humbled by the trust Beth put in me to sing this all-important set of tracks with her.

There is nothing easy or simple about letting someone else into what you hold dear and giving them the chance to ruin it. And I wouldn’t ruin it, if I could help it. But there was always the possibility that what I would contribute would not be right, would not be enough, would not fit. (Between Sarah and I, I am the one who is super lousy at harmonizing, and I have to really, really work at it to get something respectable together.) But Beth didn’t worry about that. She trusted me, and she invited me into her heart to get this project done.

Besides the music — and, believe me, the music is enough ALL ON ITS OWN — there is also some absolutely, positively stunning art. The artist made art for all 17 of the songs. They’re very difficult to describe. But they…I mean, they just LOOK like how the songs sound.

Talk about fanart. That is just the ULTIMATE in fanart.

So. Now that I’ve gushed at length about Beth, and her art.

Why did I want to put this in today’s blog?

Well, first. Because the album is out, and I have one, and I love it, and you will love it!

Second, because wayyyy back when I began blogging in the first place, I had always intended to spotlight people who were making things, people who deserved an extra boost of attention. Not that I have a wildly robust readership here, honestly. But if I have a thing, I share it, regardless of how big or awesome it is. I have this small blog, and this small audience, and if that’s all I can offer to a person who has been friend and sister and supporter and source of wisdom and kindness and help, well, then that’s what I’m going to do!

Last week I wrote about my own writing and inspiration, about the relationship between me and those who contribute to my creative process.

Beth is one of the most supportive people in my life when it comes to my own art. She has always helped Sarah and I with music, has believed in us, has offered us opportunities to perform or grow or learn. But she also can understand my investment in fanfic, can ask me about writing and genuinely care how I feel about it. We approach writing differently, but she has never been far from my list of trusted people I could talk to about stories.

What people do on AO3 with comments, on Twitter/Tumblr with fanart, Beth has done for me in person for the better part of a decade.

I don’t talk about my friends, my family, my Clan very often. Many or most of them are private, and I try to respect that. I don’t give many real names, nor links to ways to reach them. (Sarah is different; she’s always up on YouTube with me.) But promoting Beth, spreading her music and her message and her talent as far as I can is not an invasion or an unwelcome peek into her life on the interwebz. I have her enthusiastic consent to make known to however-many people read this thing how awesome she is and how you should buy her CDs.

While writing this blog (and also working), I’ve had the album on repeat. And I finish writing it feeling like that first time I’ve stepped into a new situation, a new place, a new adventure, and I’m breathing in that new wind and looking up at the new sky, and I am ready to start walking.

She actually captured that feeling for me, that feeling of taking a journey, of stepping into one’s best and truest self, and thereby finding the way home.

“so I’ll depart for more adventures
but know they’re only for a while
though my journey goes on, I am anchored
I’ll come back knowing I am free

My journey as an author is my own. My journey as a musician is bound always to Sarah. But Beth has been there for all of it for a decade. And now that I get to experience her own version of that journey, feeling what she has felt and hearing her heart in her words, all I can do is grin and feel my own heart soaring in return.

I put a lot of music in this blog. Rarely does the music mean as much as this does.

Beth let me step on her journey for a bit, and I am the better for it.

Go listen to it, go buy it. You’ll be better, too.

One thought on “The Hero’s Journey”