The single long work was a project that grew out of my watching through the entire-to-date series of NCIS: Los Angeles and deciding that, yes, every single episode had a tag that needed to be written down. Because I cannot watch that show and not want more of the interactions between Callen and Hetty. I CANNOT. So during the watch-through, I started writing them, one episode at a time.

(Many thanks to Sarah’s patience on that one. Have you ever tried bingeing a series with someone who has to pause for 20-30 minutes after every episode to write? But she did!)

Some of the oneshots were short — 600 words or thereabouts. Some cracked several thousand. But I wrote them all, reacting to the events of the episode or the overall plot of the series or just putting in some extra snark because, really, there is always more snark. It’s amazing to me that I got it done in the time that I did — I started the project in April and I wrapped it up in the end of August. And that with at least 2 weeks off around the TCWC concert and 3-4 from CONvergence. So while the stats themselves aren’t very flattering (because the counts of days don’t include those times when I very rightly forgave myself and took a break) the actual product per day is pretty impressive. And it meant I was writing scenes every day, multiple times a day. As an exercise, it was a fantastic way to dig into short story-telling with a constant source of new prompts and ideas.

The other writing from 2018 was all the oneshot project I talked about earlier this spring. I didn’t write all 47 that I had planned, mainly due to the NCIS:LA writing that dominated my thinking. But the ones I did write made me happy, and they stretched me in new ways, too.

But the thing that isn’t anywhere in these stats is the work done on the novel prior to querying it.

I do a lot, or even most, of my editing in bursts. I edit as I go — I know no writers who don’t. What’s writing at all if you don’t write it the way you mean it the first time? But I reread a lot between the initial writing and whatever comes next. For example, of the oneshots I wrote this year, I think I’ve reread and edited each of them at least 4 separate times, usually months apart. Then, usually 2 weeks before something goes up online, it gets a deep edit where I’m really focusing on “does this all lead where it should?” The week I post it, it gets another deep edit. Sometimes I take longer to edit a oneshot or a single chapter than I did writing it the first time around. Not because I make a lot of changes, but because I consider the ones I do make rather carefully.

Mistakes still happen, though. Can’t be right all the time.

With the novel out for query, though, it was a WILDLY different process. First, I gave it 2 separate deep edits this spring. Then I sent it to my beta readers, who helped call out scenes that needed work or bits that could be better or characters who would benefit from some more flesh on their bones. Then I gave it ANOTHER deep edit. Then I handed it to a person I truly trust for a solid round of copyediting.

We should note that copyediting is the thankless, utterly necessary stage which requires a mind of precision and focus and unrelenting attention to detail, and no matter how good I am, I will NEVER be as good as the best copyeditor. So I’m glad I had a good one to help me out.

When she was done with it, then I gave it YET ANOTHER deep edit before sending the first query. I’ve done another deep edit since, because until this thing is in the hands of a printer, there is always both the time and the need to improve it. It’s that whole “it will never be perfect and never quite live up to the majesty of my vision” thing — without being so silly. But I think every day I learn something new about writing, I want to go put that into the work to make it the best it possibly can be.

So that’s 5 separate readings and edits of the novel just by me, plus my beta readers, plus my copyeditor. And the manuscript grew not so much by wordcount as it did small improvements. Bits and pieces added to scenes, or a couple of new scenes added. I don’t think it ultimately changed more than a few hundred words here or there, but those changes mattered.

They don’t help my year-end wordcount, though.

But it’s all right. Giving myself the time to focus on the novel for query was important, and I wouldn’t sacrifice it for anything. Giving myself the time to do things other than writing, specifically TCWC and CVG, is super important. And forgiving myself for not writing 300,000 words is important, too. I think I needed a break, because I’m already looking forward to projects in 2019 with more enthusiasm than I had at this time last year. If a year “off” as it were can amount to this, then I’m still doing something right.

And, besides. 2018 is just one year. My writing tracking goes back to 2004. Win, lose, or draw, I’ve written a metric shit-ton in 14 years, and I can be very proud of that. Sure the totals for 1 year aren’t spectacular, but taken as part of a whole, they’re a very strong part regardless. 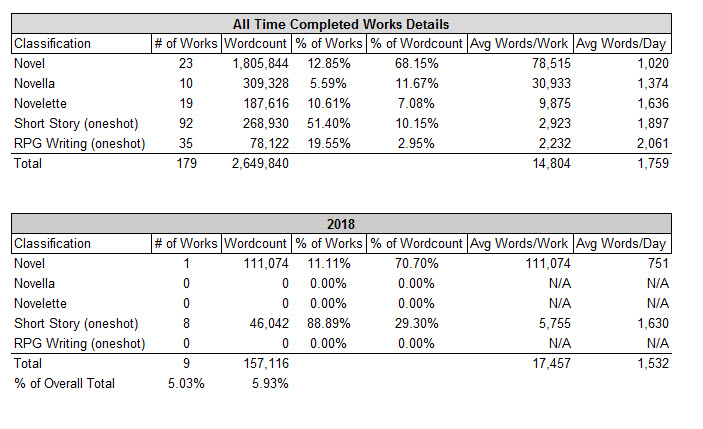 But I’ll still be writing stories, and posting them every week, and maybe maybe maybe even publishing one out in the world and not just online.

Whatever happens? 2019 is a year of promise, and I look forward to the challenge.