When we had the snow-covered Ostara, we thought that was a little silly.  Predictable even for Minnesota, but silly.

The April blizzard of this past weekend, though?  Not silly.

The pile of snow at the end of our driveway where the plow bunched it up was WAIST-HIGH on me.  And filled with chunks of snow balled together so firmly we started making jokes about finding the anatomy of dead snowmen.  We took some pictures, but it is difficult to show the real scale of the wintry disaster that has descended upon Minnesota when it is supposed to be spring.

All the evergreen trees on our property look like some variation on this, if they aren’t broken in half: 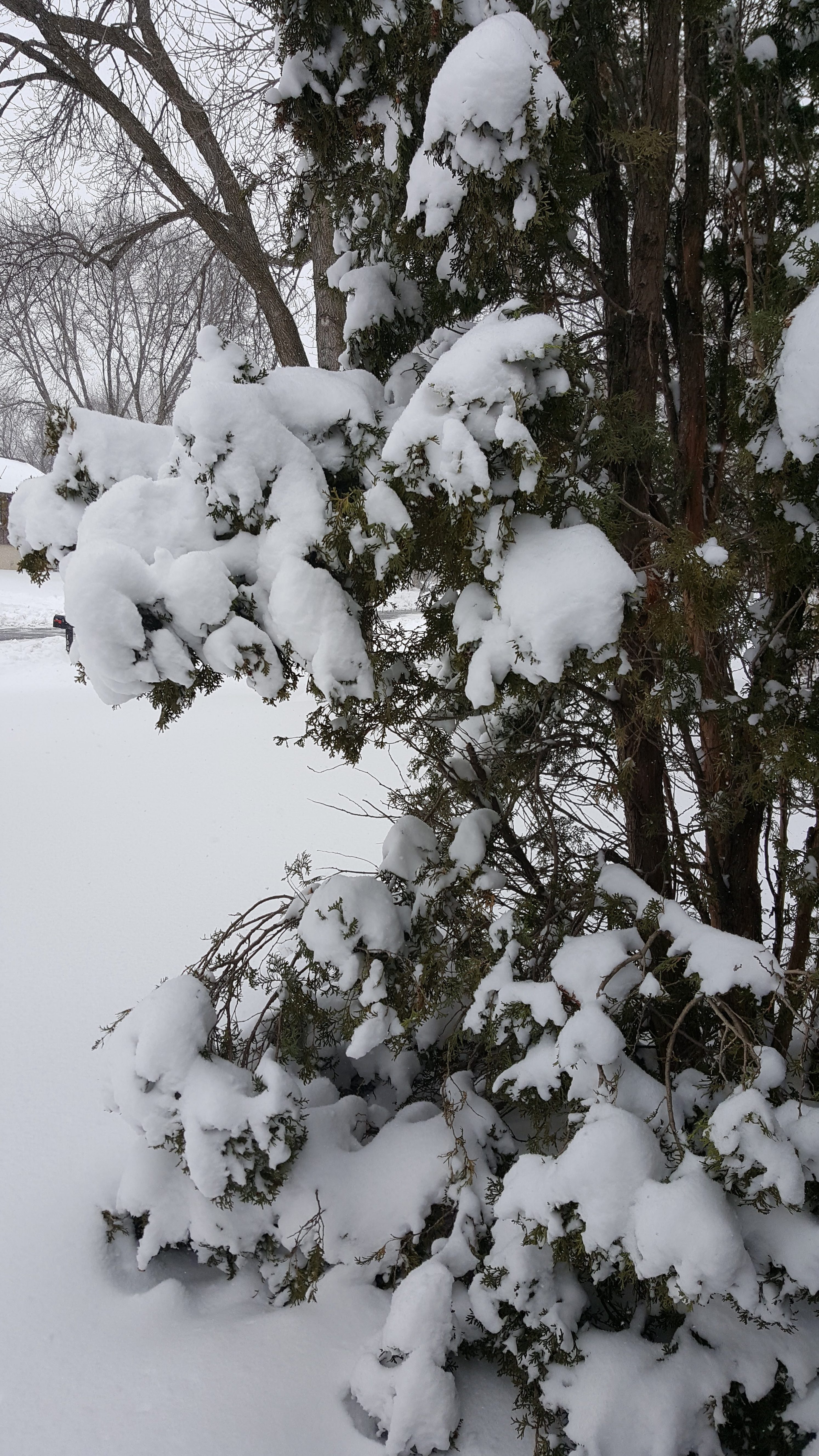 Here is what we called the “Four Shovels of the Snowpocalypse:” 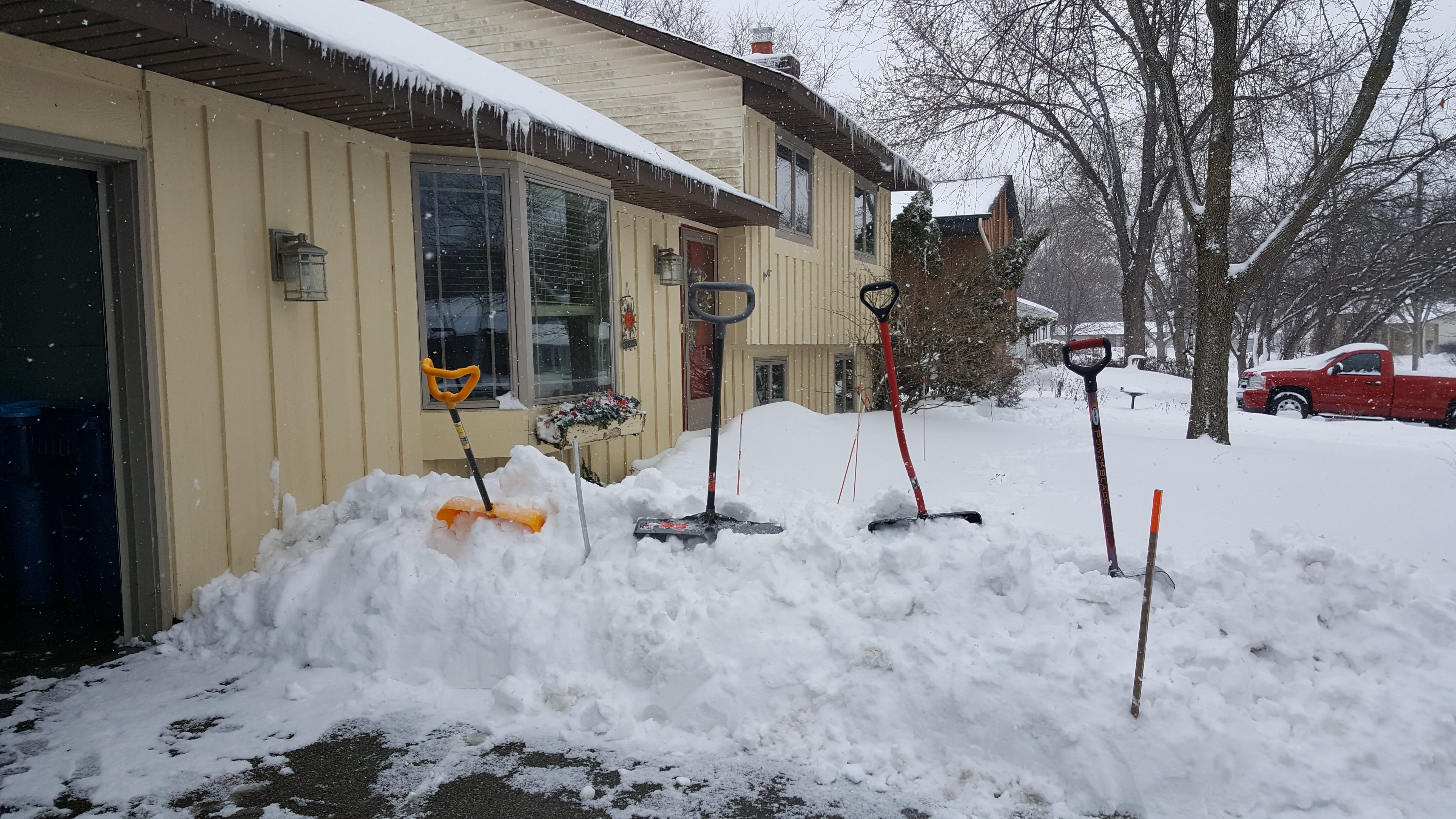 And here is the courageous team of my wife and our two Clanmates who live nearest — it took all four of us to dig out the driveway and rescue a couple of the trees.  We didn’t even bother with the sidewalk, as you can see. Anybody who needs to come see us can come in the driveway until the thaw: 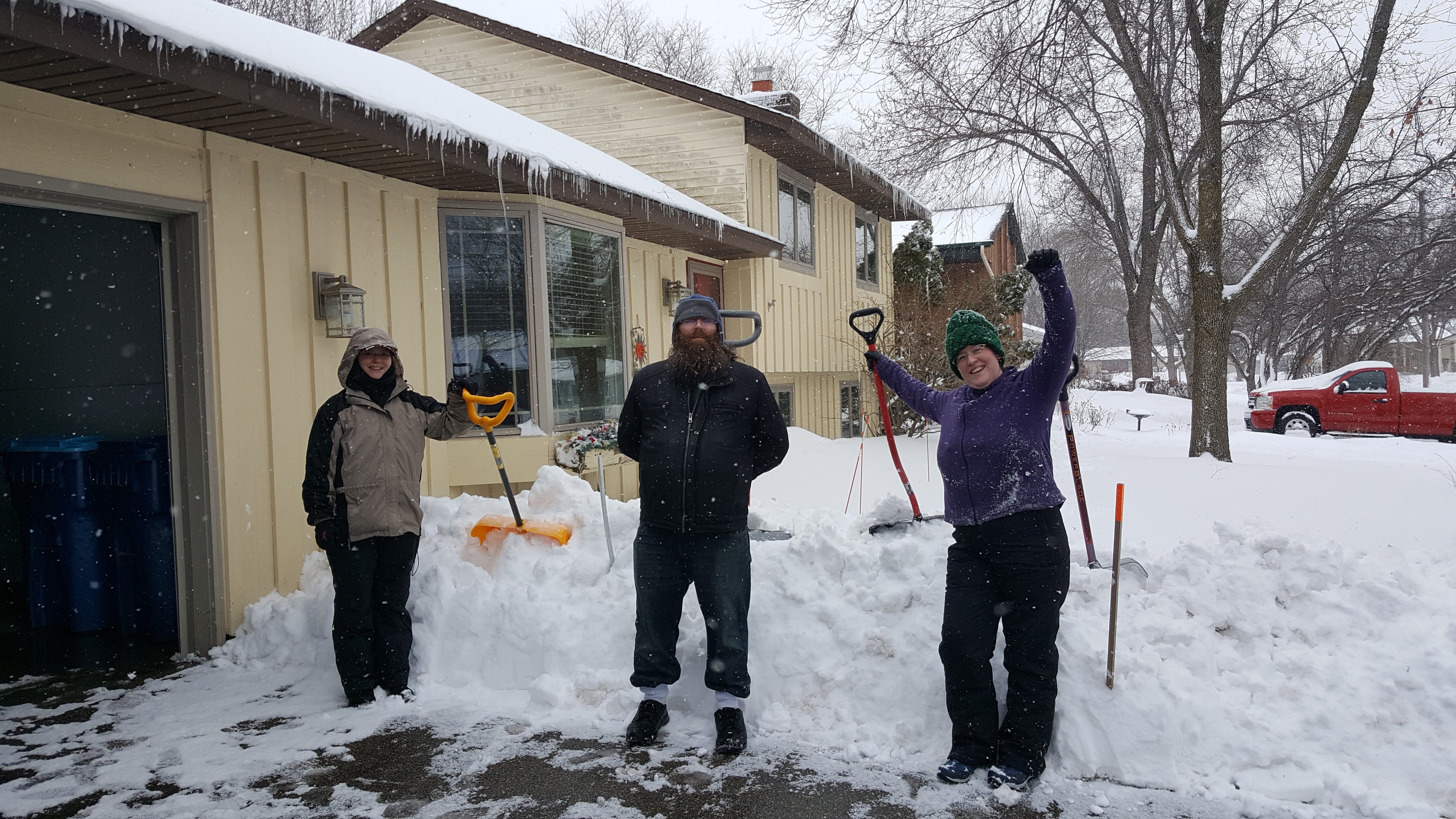 If Sarah and I were different people, we might be actually upset if this blizzard were to keep us from spending this week in some kind of special way.  But we won’t, because we don’t do that sort of thing.

This week is our 15th anniversary.

Now, due to the vagaries of recognition of non-straight marriages and the shifting politics that have occured in the past 15 years, Sarah and I have 3 separate anniversaries.  Late August of 2013 is the date on our marriage certificate, because that’s when we could gather our friends and family in our backyard the summer Minnesota legalized same-sex marriages.  But that was a very informal ceremony — Sarah wore a t-shirt, I was in shorts, and we interrupted the vows midway through for me to dodge away from a wasp. It was a beautiful day, though.

In 2010, we had our “official ceremony,” which is the one where I wore the awesome dress, Sarah wore a suit, both our sets of parents came, there was an exchange of rings, and we made our vows public for the first time.  In 2010, we didn’t really know if or when marriage would be legal in the state of Minnesota, or in the US. But by then, we had been together 7 years, and we knew we were going to be together to the end.

For that ceremony, we wrote the song we call “Binary” because that’s what we are — a pair of binary stars, forever in orbit around one another, defining one another, inseparable.  Born together, bound together, alive together. And in the end, wherever it ends, however life closes, we’ll be together.

But it’s 2003 where our relationship began in truth, and that’s where I count from.

We had been friends for more than a year when things changed between us, and it had been a very difficult year for us both.  We had seen friends get together and grow apart, we had faced some very painful experiences and realizations, and we were in the midst of that growing season that happens in college when, for the first time, you lift your head up in the world and realize you are going to have to start defining yourself for yourself.

Sarah was a huge part of my process figuring out who I could be, who I wanted to be, and she was really the first to believe in me so very thoroughly and unflinchingly.  She was my best friend, the person I felt safest with in all the world, and I was changed for knowing her.

But in April of 2003, our relationship changed over the course of about 3 nights.  It was a slightly slow revelation, like the movies in slow-motion, where we both came to understand that we wanted to care more for one another than anyone else.  We even made jokes about how we might someday fall in love and get married, but we didn’t think a relationship with a spouse could ever really be what we were together.  It was a scary two days to take that to the logical conclusion of “maybe we just need each other.”

Five weeks later, Sarah asked me to marry her while calling me a goofball at the same time.

Fifteen years has changed us both in ways neither one of us could have imagined.  We’ve been through dangerous illness, the breakup of families, financial struggle, and a world which sometimes was downright horrible to us (there’s really nothing like having to walk through a line of virulent protesters to get to the wedding of a pair of gay friends).  We’ve been through rounds of therapy, alone and together, we’ve had moments of utter despair, and we’ve seen each other through dangerous depression.

But not once — not once– in fifteen years, have I ever wanted to share any of that with anyone more than Sarah.  And no matter how bad or unhealthy things got, I never wanted to do anything but make it right with her.

All people talk about marriage needing communication, and respect, and a sense of humor, and patience, and generosity.  And all those people who say those things are correct. If you cannot be completely and totally honest, completely and totally yourself, without even a shade of fear in front of the person you married, then you will never know freedom or trust.  If you cannot look at the person you chose to share your life and think they are 100% in the wrong, totally off their rocker, and still fully think they are an awesome person whose opinions, though wrong, deserve to be heard and treated fairly, then you cannot really stand as equals.  If you can’t laugh until your head spins with the person you married, can’t share jokes and snark and puns and terrible songs and all the rest every single day, then you’re missing out on a lot of joy. If you cannot force yourself to take a breath in a heated moment even if it feels you are putting your chest through a cheese grater, you’ll never be able to be quiet when the person you married most needs you to listen.  And if you can’t love completely, unconditionally, would willingly give literally anything without a second thought, then you have missed what it really means to cherish someone else.

Fifteen years with Sarah has been a lifetime of laughter and joy and crazy moments and tearful exchanges and daily cuddles — and it can never be enough.  Fifteen years on, and sometimes I just look at her sitting at her end of the couch with her laptop and start to cry because I love her so damn much and I cannot, cannot hold it all inside because I could never be big enough to feel this much.  Fifteen years from the start and I know I am a better person, a kinder person, a more understanding person, because I have become so for her. Fifteen years has not flown by, it has soared.

Fifteen years I have belonged to Sarah, heart and soul, and will until the universe collapses into nothingness.

We don’t celebrate it — the blizzard doesn’t do a damn thing to impact our plans because we never make plans.  We never exchange gifts. We never buy flowers. We don’t always even remember the milestones. Every single day is a blessing with Sarah, and every day is worthy of celebration and trumpets and grand gestures because I love her that much every day.  I don’t ever stop thinking about it. I don’t ever become numb to it. Love is wonder, and I am still lost in wonder to this day.

We’re probably going to spend our anniversary watching cartoons and hockey and YouTube together.  Nothing more special than that, because there is nothing we could do that would be special enough to rival what I feel every single time I have the privilege of holding her hand, or giving her a hug, or flopping an arm over her in sleep.  We don’t celebrate the specific days because every day for fifteen years, even in the worst of times, has been a celebration.

Sarah is in my life, she chose me, and I get to spend every breath being hers.  And by being Sarah’s, I have become myself.