This week is Thanksgiving for those of us who celebrate it.

Thanksgiving means all kinds of things to different people, and it has meant different things to me over the course of my lifetime.  As a child, it was a huge gathering of my paternal grandmother’s whole family, her sisters and their kids and all my cousins gathered around long tables with folding chairs and everybody bringing at least 2 more dishes than we really needed.  It meant hiding in Grammie’s back room, making houses out of boxes, or piling in with all the kids of a like age to see if ANYBODY could get past the 3rd level of Battletoads on the NES (spoiler alert — we couldn’t).  As I grew older but still lived close by, I really began to enjoy Thanksgiving with that extended family.  I started helping out with dishes more, or serving more, and I started to learn why it was interesting, not boring, when my grandmother and her sisters gathered around a table with mugs of tea just talking.  (The football watched by the men was still boring until I met Sarah and she introduced me to OSU.)

Living in Minnesota necessitated many changes on my part when it came to traditional family gatherings.  Some years, I’ve trekked back to be part of Thanksgiving, but it isn’t the same.  A lot of the relatives whose presence I most enjoyed have passed since then.  Now, the gathering, when it happens at all, is smaller, mostly populated by my generation and my nieces and nephews.  Grammie still makes the best stuffing and mashed potatoes in the family, though.

The years that I can’t or don’t go back to the land of my ancestors, however, I host Thanksgiving myself.  Now that I have a home of my own, I make a point to open it for Thanksgiving to anyone who wants that same connectedness and closeness I do.  It’s my very-firmly held belief that no one should be alone on Thanksgiving who doesn’t want to be, and that everyone should have the option of a warm, inviting, loving atmosphere in which to spend their day.

Thanksgiving is often my favorite holiday of the year because of that.  I get to open my house and invite in whoever needs or wants that shelter, that fun.  Some years we’ve had lots of people; some years we only have 4.  This year, I’m going to be hosting between 9 and 11, which is just enough to make the house seem really full (and just enough to necessitate bringing down the second table).

It’s always a big event when we host a party like this.  For Thanksgiving I almost always do turkey because, obviously, but some years I’ve added a ham as well depending on the crowd.  Last year’s turkey was ALMOST a disaster and required a 5am run to a grocery store which I never ever want to do again.  This year, with only 1 meat, I’m less likely to end up in panic-mode at 5am.  I hope.

If it DOES happen, this time I’ll take pictures.

I always brine my turkeys, which, the first year was HILARIOUS because I didn’t have a pot big enough so I, uh, kinda made one.  By taping paper bags to the outside of my pot and putting the turkey and the brine in a brining bag and kind of…propping it up in the fridge.  It DID work and it did NOT spill all over the fridge, and it was epic.  Now I have a proper brining bucket.

(I have searched for a few hours for a version of the picture of my epic paper bag brining solution and I can’t find one, unfortunately.  Otherwise I would happily provide the photographic evidence of its hilarity.)

I’ll also be doing squash and pudding, and Sarah’s handling the stuffing.  Others bring the green beans, the potatoes, and whatever else they like the best.  We’ve had everything from tempura to khir at our table, and it’s all welcome!  We set it all out along the kitchen counter like a giant buffet and leave it out all afternoon.

Because once the food has been eaten, it is time for games.  Board games, card games, pen-and-paper games — depending on the crowd, we play.  (I usually miss this part.  5am does NOT get along well with me and I end up napping most years.  Last year, post the run to the grocery store and the emergency backup plan, I napped so soundly I didn’t realize everyone else had done all my dishes for me.  My friends are AMAZING.)

Some years, we open our house again a few days after Thanksgiving to celebrate with those friends who spend their holiday with their other families.  This year, we’re a little too busy to pull that off, but we might yet have what Sarah calls Pie Night another time.  Possibly for NYE.

But the “when” isn’t really the part that matters.

The part that matters is the part where I get to sit around a table with family and friends.  Sometimes the family is related by blood/marriage, but more often, it’s those people who are family of the spirit.  The part that matters is being together, sharing food, snarking at each other, telling stories, laughing, being safe, being welcome, being wanted.  It’s no different from what I knew every year at Grammie’s house, even if I didn’t understand while I was building a train out of cardboard that *that* is what made the day so special.

Thanksgiving is when I get to spend special time with the people who make life worth everything, and when I get to remember how very, very thankful I am for every step that led me here.  For attending Carleton and meeting Sarah.  For stumbling into the TCWC and finding a choir family.  For being invited to perform at CONvergence, and then wandering up looking to volunteer, and being drawn into a community and a fellowship.

Every step, wrong or right, backwards or forwards or right off the path, has carried me until I’m standing here.  And I cannot, cannot imagine my life any differently.

So I’ll spend Thanksgiving a little teary-eyed and a little overly sentimental.  Because I am so very thankful.

Also, because of the parade.

I have THE BIGGEST CRUSH on one particular float in the Macy’s Thanksgiving Day Parade, folks.  No, seriously.  It’s been my favorite for as long as anyone can remember.  And I have watched the parade EVERY YEAR without fail.  When I’m not hosting, I tend to live-blog it (hosting makes me too busy, to say nothing of being high-strung, for that).  I watch it, and I laugh at the silly things, and I rag on the bad commercials, and I cheer at my favorites.

But I always start to cry when I see Tom Turkey. 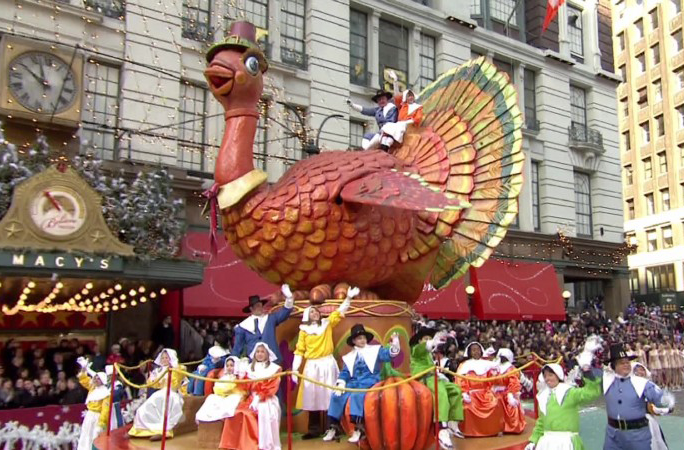 I have to think that at least part of my extreme love of the parade is that it heralds a season of family and a season of humanity.  It’s the time when, for about a month, people become what they pretend to be the rest of the year.  It’s the time when we think about each other a bit more, care for the little things a bit more, notice each other more.

But there’s also an inherent value and charm to the parade itself as well. Maybe it’s that sense of commonality that I always feel, just as I did with the Olympics.  Thanksgiving morning, 3.5 million people don’t care about political parties or artificial divisions.  They just stand there on the sidelines screaming for the people who come by.  Everybody along the sidelines becomes about 10 years old, enchanted by the simple magic of giant balloons, joyful kids, and thumping music.  For that morning, in that place, people become the community they want be.  And that means something very real to me, too.

And Tom Turkey?  To me, that crazy float has become the icon for all the good things of the season.  I think he is to me what Santa Claus is to lots of kids — he’s the hero of the season, the one who makes all that goodness possible.  He brings the parade, heralding the holiday season and all the things that come alive with it.

And once I’ve seen Tom Turkey, I know everything’s going to be all right.  Even if MY turkey goes horribly awry, I’m going to be spending my day in laughter and love and welcome joy with friends and family, and no amount of disaster measures up.

But if there IS a disaster, I’ll let you know next week.