I have a strange relationship with this particular celebration of Irish heritage and also green doughnuts.  Which, by the way, — no.  Seriously.  We have green milk, green rivers, green beer.  Not EVERYTHING needs to be green today!

When you’re born and raised anywhere near the East Coast of the US, you have at least some connection to St Patrick’s Day.  I remember being in elementary school and there being a regular game of pinching anyone who didn’t wear green.  I also remember one friend of mine getting out of a day full of pinching by virtue of having green eyes.  Then we had green cookies and milk at lunch and made shamrock cut-outs and, you know, all the kid stuff.  I don’t think I knew how much else went on, from dyeing the Chicago River green to the parades and general revelry, until later, though.

I do have a fair amount of Irish heritage, though nobody seems to know exactly how much because both sides of my family approach any study of genealogy like they are considering riding on some sort of horse/cougar mix — they’d just rather not.  But my grandmother can tell stories about the Irish women she heard stories about back in our bloodline somewhere.

My other connection to St Patrick’s Day comes from a religious source by way of YA fantasy.

Among the most formative books I ever read as a kid was the Time Quintet series by Madeleine L’Engle.  Particularly the first three to be published — A Wrinkle in Time, A Wind in the Door, and A Swiftly Tilting Planet — made their marks in my mind and my soul.  The last of these is the adventure of Charles Wallace trying to rewrite history so that the world can be pulled back from the brink of nuclear disaster.

Along the way, he makes use of what the book calls “Saint Patrick’s Rune” which is really a poem derived from the more famous Lorica, or Saint Patrick’s Breastplate.  It reads:

This rune has been with me for the majority of my life, and I’ve always found it helpful to recite in times of stress or irrational fear, like taking off in an airplane or facing down a bad storm.  Whether it has any empirical effect, it’s always helped me center myself, reorient myself in the scope of the world, and find the inner balance to keep going.

So I owe a lot of inner peace and fortitude, especially in my younger years, to Saint Patrick of Ireland.

I’m not nor ever have been Catholic, but I feel gratitude that one person of that order penned (or, allegedly penned) the full Lorica, which is a powerful, swelling recitation that, to a person of the Christian faith, must be like sounding the ultimate anthem of courage and victory.  Even I am moved by its power and its intensity.  Get that thing going, rev it up, and you could take on the world.  For me, it’s been a light of prayer even when I didn’t pray, and I’m grateful for that.

So, between my innate, if muddled, Irish ancestry and my personal appreciation for this work of Saint Patrick, I “do” St Patrick’s Day.  I wear green, usually various pieces of different shades of green.  I will not eat the appalling green doughnut or bread or whatever awful thing someone’s stuck dye in this time, though.  There are LIMITS, you guys.

(Also, I don’t, I DO NOT, attempt a Lucky Charms-like accent or throw around the ‘faith and begorrah’ nonsense because YUCK.  Anti-Irish racism was (and still is?) a thing, you know.  So is cultural appropriation.  And that’s BEFORE you start tossing around problematic stereotypes.)

This is my perfect example, though, of my expression of St Patrick’s Day: 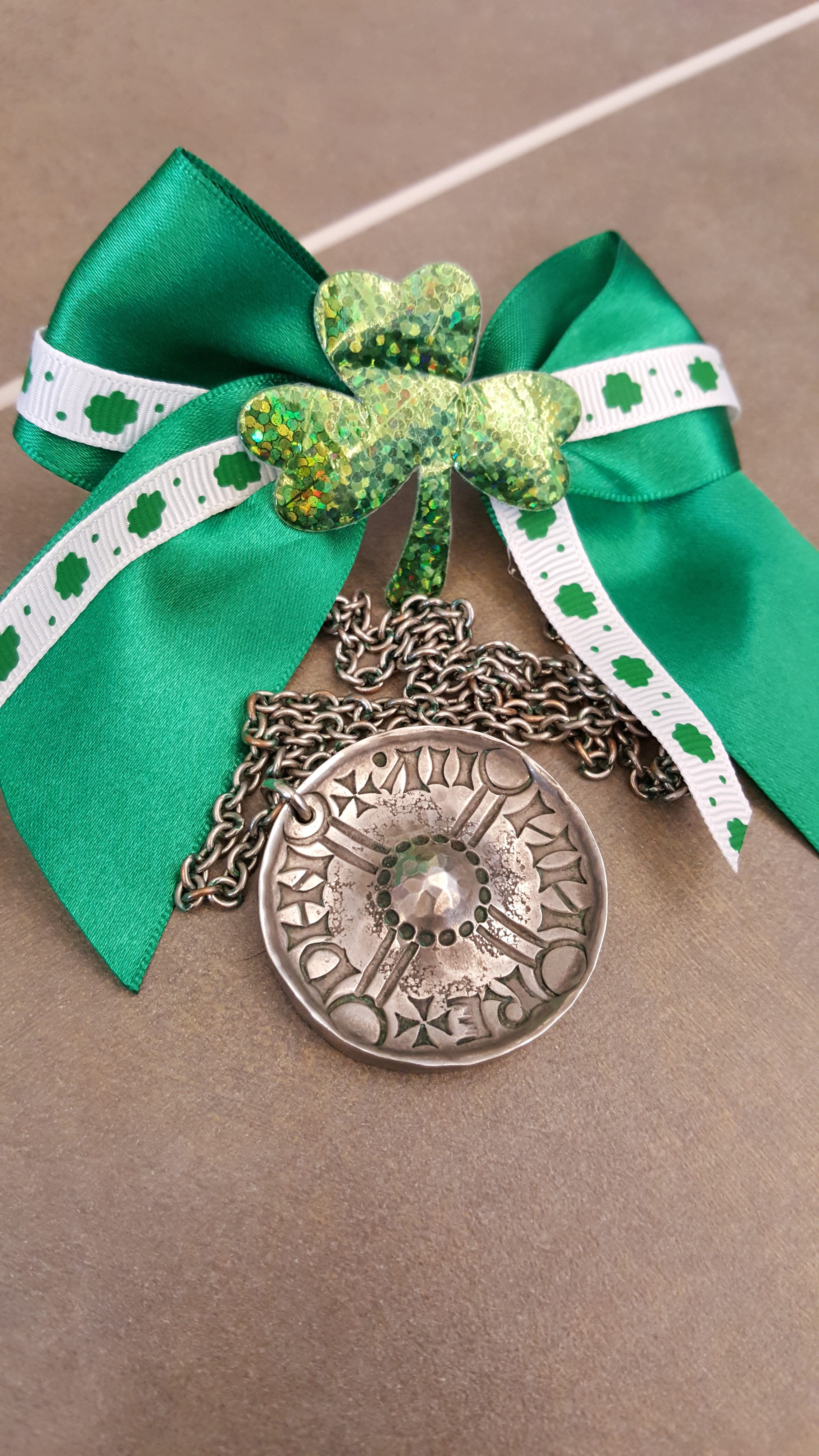 On the one hand, my American, commercialized version in the bow I actually do have in my hair.  My proof of being what amounts to a “Plastic Paddy,” since I truly never have been to Ireland and it would be disingenuous for me to claim to *be* Irish, but my pride in the Green all the same.  And on the other is this pendant which was given to me by my grandmother which she received from one of her own Irish relatives.  The pendant is pure nickel and is based on an Anglo-Saxon or Hiberno Norse long cross penny from a thousand years ago.  Though nobody can really figure out what it says.  The words don’t QUITE match up to the originals.  But this pendant was carried by my bloodline long enough to make it an heirloom, to make it real.  Even if it isn’t “genuine” by any technical definition.

A person can be a lot of things.  I am American, but I am proud to have even a trace of Irish ancestry.  I wear my green in ignorance of what it really means to a person actually from/in Ireland, but I also wear the memory of my family which traces its roots to somewhere in Ireland’s history.  The affinity is real, even if the lineage is lost.  And the respect is real either way.

Happy St Patrick’s Day, everyone!  Enjoy it however you like.

…Even if you like green beer and greener doughnuts.