The last couple of weeks have been pretty tough on my end.  I’ve had everything from a hospital scare with an elderly and beloved family member to a financial crisis to a stomach-bug-thing in the last 10 days or so.  The accumulated stress of which, as if my bipolar depression decided not to be outdone by circumstances, made everything harder; the nights when I wasn’t imitating my insomniac high school experience were disrupted by nightmares that had me waking up sobbing.

Hey, it happens to everybody sometimes.  With or without any kind of bipolar downswing, depression, anxiety, or anything else that might push its way into the situation.  We all have those periods of accumulated suckitude that our psyches use to beat us to a pulp.

The worst stuff always does seem to happen when we are least able to deal with it.

I was going to write a whole post about how I specifically cope with stuff like this, but the more I wrote, the more it took out of me.  Like giving too much blood, even going through the process of my emerging from the deep well of helpless negativity was threatening to put me back there.  So I stopped.

I will write about it someday.  I’ve got lots to say.  But I’d be a pretty poor model of how one system of coping with depression can work if I actually increased the problem with the telling of it.  I have learned to trust my inner This Shit Is Not Helping Meter.

So, instead, I’m going to focus on something fun.

I have a dragon! 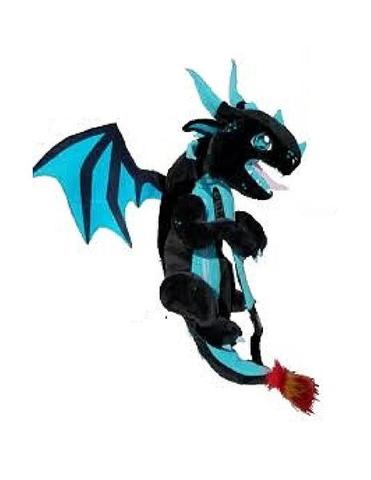 Her name is Defiance and I got her from Rocky Mountain Dragons as part of a Kickstarter.  Sarah got one as well, red instead of blue, which she has named Trinket.

The dragons work as small carrying-packs for a cell phone and an ID and not a lot else, but that’s about all we really need for wandering a Con so that’s what we’re going to do.  I’ve already taken Defiance to a leaders’ meeting for CONvergence (more on that some other time) and she received a fair amount of appreciation and got at least one hug.

The only drawback to the pack design is the strap, which feels like it’s cutting into my throat when I wear it strapped under my armpit.  I can affix it lower, tie it to my belt or something, but then it gets tight on my shoulder and sternum.  What I really need to do is find a way of snapping it into whatever cosplay or something I’m wearing so she wouldn’t just have to hang on me.  If I figure it out, there will be pictures.

I’ve always loved dragons.  I also love unicorns, gryphons, sea serpents, and every other magical/mythological creature (who isn’t inherently evil — not a fan of evil, generally).  Defiance is a little bigger and built differently from the fire lizards of Anne McCaffrey’s Dragonriders of Pern series, but there is a definite similarity.  The big dragons of Pern are near-human intelligent and telepathic, forming lifelong bonds with their riders.  The fire lizards, their tiny cousins, are less intelligent and more empathic than telepathic, but they still bond to people and can share memories and feelings.  In the same way, the dragons of the How To Train Your Dragon movie/TV franchise makes dragons more than animals with the mental capacity of a dopey cow.  Toothless is almost as clever as Hiccup, and all the dragons are able to interpret human speech after very little exposure (except Hookfang, who mainly ignores Snotlout; but, hey, I’d ignore him most of the time, too).  They are not pets — they are friends.  Partners.  Companions.

Assuming I can situate her comfortably on my shoulder, Defiance will be my constant companion for CONvergence.

When we were naming our dragons, Sarah opted for Trinket because it seemed like a good name for a fire lizard-sized dragon who might be useful for carrying little things and messages, but flighty and too curious as well.  She’ll carry the little one at CONvergence sometimes, too, or keep it at her side when she’s on shift on the Bridge.  Trinket will be her familiar, her teddy bear protector and her stuffed co-conspirator.  And keeper of her room key, probably.

My Defiance is a little different.

I see my dragon as being closer to the daemons of the His Dark Materials series by Philip Pullman — an extension of myself as well as a sidekick.  I named Defiance with that in mind, after one of the six pillars of my basic personality/attitude/mental attributes.  I think I am made up of some kind of muddy confluence of honor, loyalty, kindness, courage, endurance, and defiance.  These are the things that help me thrive, that give me strength and energy, that hold me up and sparkle the brightest.

Sometime I’ll go into what they really mean to me and how I mean them about myself.

But of these, Defiance is the one I wanted represented outside myself, especially in places like CONvergence.

I am a rebel, born and undaunted.  Which is hilarious considering that I never did ANY of the supposedly normal teenage rebellion things.  I never tried to miss my curfew, never wanted a tattoo or to dye my hair, never pushed the normal social/parental boundaries.  And yet HOLY CRAP did I ever push boundaries.  Just…not the usual ones.

Why should I be conventional in my revolution?  Why would anyone, given the choice?

Now, I’m not suggesting I am a jerk who fights all rules JUST BECAUSE and plays the constant devil’s advocate or contrarian at every possible turn.  I’m perfectly happy to go along with things that make sense or are inherently healthy or follow with some kind of sensible logic.

But give me a rule “because that’s how it is” when I can poke easy holes in it?  Nope.

This pretty much extends to EVERYTHING.

A dear friend once made a mix CD for me back in college and she named it “Willful Defiance of the Box.”  And I have adopted that as one of my proudest monikers.  The only boxes that hold me are the ones I choose for myself, on my own terms, in my own time/way.  Anything else?  Fuck it.  I will joyfully, happily, gigglingly ignore the rest.  I might not do it in someone’s face or in a cruel way, but you’ll look to see how things are and — whoops, there I am busily being myself and defying expectations again.

I find that if I don’t let myself defy what binds me, I’m too easily confined.

CONvergence is an amazing, soul-affirming yearly pilgrimage, but things will be different for me from now on, having officially joined the leadership of the Con.  And I know I can do what will be asked of me, I know I can help people and I can be the kind of volunteer that will make things better in the end.  But sometimes I get lost in that press of people, thousands of others who are taller or more experienced or prettier or more confident.  I look into the crowd and I forget to hold myself up, my head raised and my shoulders back and my certainty undaunted.

Defiance is going to remind me.

She will be my shield, my physical, constant affirmation that I am at the right place at the right time and I can trust myself.  She will be my grounding reality that just because it would be easier to back down doesn’t mean I should when I really, really shouldn’t.  She will be the external reminder of the defiance that lives in me while unchallenged so I keep burning through the first real challenge.

It’s a slightly cheap psychological trick, but it works.  With Defiance literally perched like a chip on my shoulder, it will help me hold onto that part of myself when uncertainty or discomfort arrives.  She will help me be the best version of myself.  And she’ll be an ice-breaker and a conversation piece as well, all useful when you send an unconfident introvert into a sea of strangers.

Plus, then I get to carry a dragon around!

I will happily admit that I love Defiance with the same love that I had for my stuffed animals as a small child and that I’ll probably hug her just the same on some sort of frequent basis.  But that’s the great thing about CONvergence — I’m probably not the only person who will want to cuddle a dragon that weekend!

Though I will have to explain that I didn’t name Defiance for a class of ships from Star Trek.  That’s pure coincidence.

The only star I named Defiance for is the one I follow from inside my heart.

And you know what?

Having a dragon familiar is seriously cool.  Nerdy and adorable, but cool.