Scene: A wild hillside battle.  Forces of opposing colors and ideologies clash under the burning sun in a riot of tiny victories and failures.  One side begins to falter, its defenders giving way beneath the strength of their enemies.

And their leader bellows over the sound, the battle cry of their people:  “I REALLY HATE ASPARAGUS!”

The army responds, swelling with pride and fierce loyalty to their united hatred of an evil green vegetable.  On the other side, courage dwindles.

The opposing leader responds:  “FOR THE BUS DRIVERS!”

The hordes of bus drivers and bus-driver-adjacent warriors respond with their own passion reignited.

And the two sides meet once more to commence their battle.

Okay.  Yeah, silly.  But whether you’re engaged in the strangest of strange confrontations or just trying to defeat yourself, it helps to have something to hold onto, some phrase or reminder or statement of a goal.  If you know what you’re aiming for, be it victory for the Horde or freedom from King Edward’s rule of wearing pants, it helps you get there.  Right?

Well, it does for me.

About every 18 months, I create for myself a little maxim, a set idea that will guide my writing until I change it again.  It’s not a rule and it isn’t fandom- or lack-thereof-specific, but more broadly it serves as a reminder of that which I strive to achieve in all writing, from a oneshot to a publishable novel.  I stick it right in front of my monitor and look at it every day.

My current maxim is the Rule of BEAR.

Be Reckless:  Don’t tell the ‘safe’ story.  Tell the story that needs telling.  Take the chances.  Make mistakes and fix them on the way down.  Challenge the rules at the root of the world.  Question all assumptions.  Don’t hold back.

Art Harder:  (There is an optional “motherf*cker” at the end of this line, per Chuck Wendig’s awesomeness.)  Craft every line like it is a safety harness dangling you over the Grand Canyon.  Write every day like the bank account will empty without words to fill it up.  Feeling uninspired, uninterested, frustrated?  Tough.  Create or die.  Bulldoze through blocks like a toddler mowing down a sandcastle.

Regret Nothing:  Let the failure of the previous day die with the sunset.  If it sucks, fix it.  If it was hard to do, relish in it.  If it felt strange, celebrate it.  Step forward and write.  If it’s the wrong story, it will be a lesson in wrongness for next time.  Apologize for nothing, not even the mistakes, because they still lend blood and wisdom to the whole.

We’ll see how it works out.

Incidentally, a very useful post on something quite similar was written by the ever-awesome Chuck Wending HERE.

And, in honor of that, a friend of mine made this: 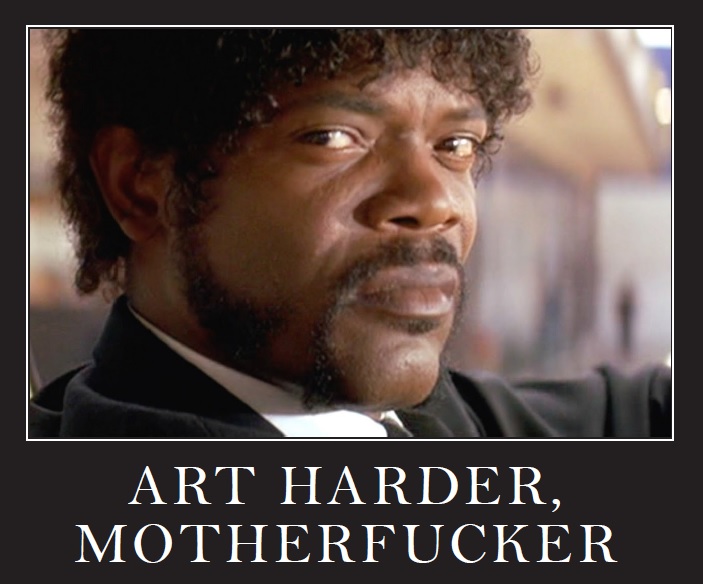 You heard the man.  Get to work.

Lastly, another author friend of mine, the amazing Eric Zawadzki, wrote this post a long time ago whose ending was all about hunting down the muse and hanging her head on the wall — on not waiting for inspiration but instead creating it.  It motivated me when I read it and helped me find a lot of agency in myself I didn’t know I possessed.

Well, no offense to Eric — he IS right, by the way — but I’m not equipping myself for muse-hunting anymore.